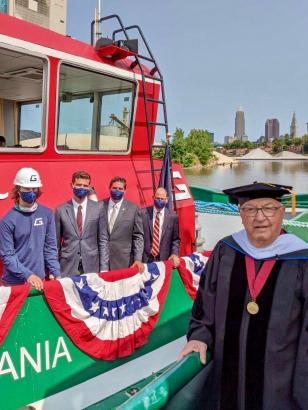 Rasmus also served as former Deputy Assistant Administrator of the U.S. Department of Transportation Maritime Administration. He played a significant role in formulating and implementing the Merchant Marine Act of 1970, Shipping Agreements with the former Soviet Union and the U.S.‑Brazil Bilateral Pooling Agreement, for which he received a Silver Medal from the U.S. Department of Commerce.

A highly engaged and active alumnus, Captain Rasmus holds an extraordinary devotion to his alma mater and its alumni. He addressed the Class of 2020 virtually aboard the Great Lakes Towing Company’s Tug Wisconsin in Cleveland, Ohio, and acknowledged the challenges graduates will face in the future, “I believe that your college education will enable you to face these challenges and prevail. If you could make it here, and you did, you’ll make it anywhere.” Captain Rasmus urged graduates to use their skills and perseverance to pursue their careers. “Class of 2020 make us proud!” he exclaimed.

Ronald C. Rasmus, you are an illustrious member of the maritime community, recognized for reshaping and revitalizing the maritime shipping industry, a crucial economic industry. As President and CEO of The Great Lakes Group, you led on one of the largest tugboat companies in the United States.

Your ability to effectively navigate myriad national and international relationships throughout your six decades in the maritime industry has achieved a tantamount level of consensus and collaboration on a global stage.

You are known for playing a significant role in formulating and implementing the Merchant Marine Act of 1970, Shipping Agreements with the former Soviet Union and the U.S.-Brazil Bilateral Pooling Agreement. Your many decades with the U.S. Navy has made you a champion of the American maritime industry, a respected leader and recipient of numerous government commendations, awards and acknowledgement.

You lend your expertise generously to civic organizations, inner-city community programs, your alma mater and its alumni. Your dedication to training the men and women who help advance the maritime shipping industry, and encouraging their pursuit of a rewarding career is unprecedented.

Today, in honor of your lasting commitment to the maritime industry, the State University of New York, through Maritime College, is pleased to bestow upon you the degree of Doctor of Humane Letters, honoris causa.