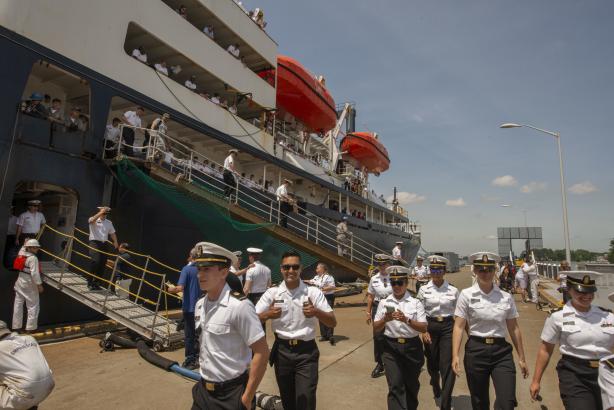 The Regiment of Cadets is a disciplined lifestyle program. It is not affiliated with the military and carries no service obligation.

The Regiment is designed to educate and train students to survive and thrive onboard a vessel. The Regiment will help student-cadets develop:

A significant portion of the regimental program is to build leadership skills in student-cadets, starting their first year on campus.

During MUG year, students learn to follow directions and work as part of a team. As their career progresses, they receive increasing amounts of responsibility for training, leading and motivating younger students.

In addition to following the regiment's rules and regulations, and participating in Regimental activities during the school year, cadets will also participate in three Summer Sea Terms aboard the College training ship, Empire State VI.

Students who choose not to work onboard a commercial vessel, but seek the discipline and leadership training that the Regiment offers may choose to join the Regiment. Those students will be required to participate in and abide by all of the Regiment's rules and regulations, including wearing a uniform and participating in Regimental activities.

Rather than participate in Summer Sea term aboard the College training ship, Empire State VI, students will pursue at least one internship related to their academic major.