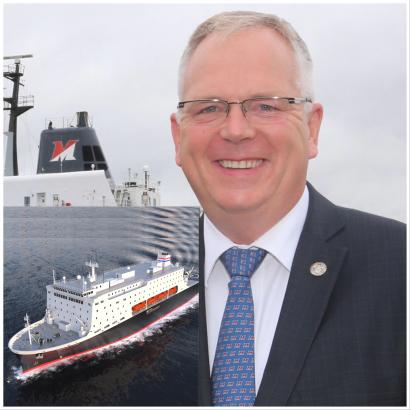 "This year's MARAD budget is truly historic in terms of the support provided to the State Maritime Academies."

As you know, President Trump signed a number of appropriations bills on Friday to keep the Government open and operating. One of those bills was the Transportation Appropriations Bill, which provides support to the State Maritime Academies through the Maritime Administration (MARAD) budget.

I am particularly pleased to report that this budget contains another $300 million for the construction of a second National Security Multi-mission Vessel (NSMV), to replace Massachusetts Maritime Academy's training ship, the T/S Kennedy. This will have a direct impact on the construction of the first NSMV replacing T/S Empire State through increased competition and decreased costs for what is now a multi-ship build.

All of this would not be possible without the outstanding leadership and support of Secretary of Transportation Elaine Chao and MARAD Administrator Mark Buzby.

In just a little more than four years, the Presidents of the six State Maritime Academies have built a bi-partisan coalition across two administrations that has resulted in $600 million for a program than many questioned and openly doubted, and some opposed.

By all accounts, this is a remarkable accomplishment, and I am proud of what my colleagues and I have been able to achieve. By working together, we have educated many members of Congress on the importance to the Nation of the State Maritime Academies, the US Merchant Marine, and the Maritime Industry. This year's budget demonstrates that many in Congress now believe in the value of the State Maritime Academies.

Today, we can pause and celebrate the results of a great deal of time, energy, and effort. In a few weeks, I head back to Washington DC to begin work again on next year's appropriations bill where we hope to maintain this historic level of support in what is going to be a very challenging budget year.