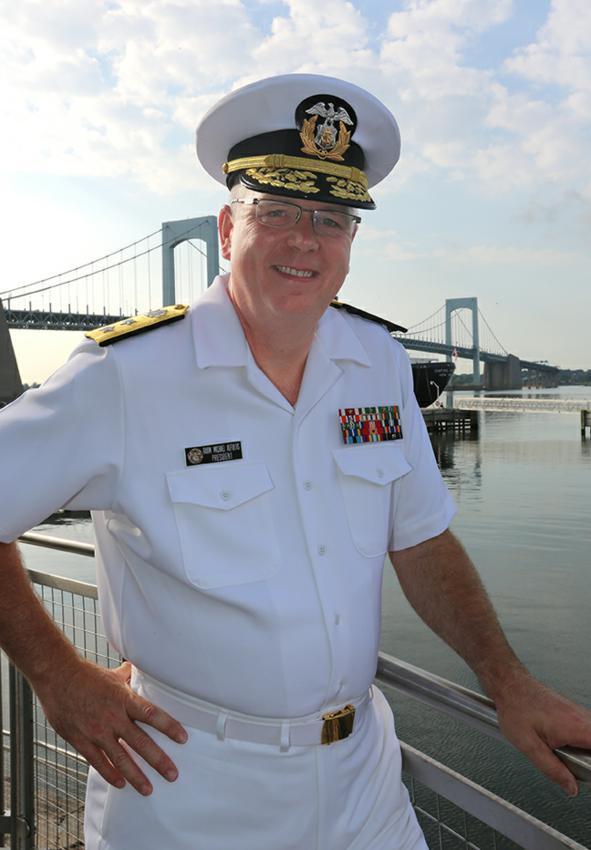 The 2016-17 academic year officially came to an end several weeks ago. This quieter time on campus allows me to reflect on the year’s accomplishments. I remain amazed by this institution – the students, faculty and staff – who continue to inspire me. I am proud to share with you much that has taken place at Maritime.

During a stormy morning May 5, more than 230 students graduated in front of family and friends in the gym.  Also at the ceremony, we were delighted to award an honorary doctorate to Angeliki Frangou, chairman and CEO of the Navios Group. Internationally recognized as a leader in the maritime world, Frangou is at the helm of a global maritime consortium that controls 170 vessels. Her presence on campus and her commencement speech were inspiring for all in attendance. Read more about Frangou and May commencement here.

The Privateer baseball team also ended the year on a high note. For the first time in their history, they won the Skyline Conference championship and qualified for their first-ever NCAA appearance.

For the cadets who have not yet graduated, the Empire State left campus May 8. During the 2017 summer sea term, the ship will visit New Orleans, Louisiana; Alicante, Spain; Lisbon, Portugal; Palermo, Italy; and the U.K. Follow their adventure on the summer sea term blog.

Efforts to acquire a replacement ship remain strong and I must thank you again for your actions to help the state maritime academies secure funding for the National Security Multi-Mission Vessels. Using the link set up by the Navy League, in just two days, nearly 6,000 people wrote to their elected officials to ask them to sign a letter supporting the NSMV program. As a result, 55 members of Congress signed a letter to the top two members of the House of Representatives Transportation Appropriations Subcommittee indicating support for the NSMV. Click here for more.

Also rounding out the end of the year was the important Admiral’s Scholarship Dinner that this year set a record for attendance and dollars raised. With 650 alumni, parents and friends in attendance, the dinner raised $780,000. Those funds go directly to help students finance their studies. Due to the event’s increasing popularity, we held the dinner off campus for the first time, at the Marina del Rey. There, we recognized five outstanding alumni: Kevin Graney ‘86, president of General Dynamics/NASSCO; Bart Eckhardt ’79, president and CEO of Robson Forensic; and Russel Paret, Keith Zelinsky and Chris Hughes, all of the class of 1992, and founding partners of Dome Chartering and Schuyler Line Navigation. For more about the dinner, click here.

While the summer is a little quieter, much is still happening. The hardworking facilities team will undertake many campus improvement projects, including waterfront enhancements to build floating concrete docks with wave attenuation, renovations to Marvin-Tode Hall and rehabilitation of campus roads, sidewalks and expansion of the running track. It is also a chance for us to continue our diligent work to develop the college’s new strategic plan. Be on the lookout for a draft that will be shared in the fall for your input and feedback.

So much happens in just a few months that it is impossible to list everything here. I think of the end-of-year student capstone projects, sporting events, conferences and speakers, student awards, and more. I invite you to visit Maritime’s website and like us on Facebook to get the most up-to-date information about the students, the faculty and the many events and activities taking place all around campus.

Thank you again for all of your support and encouragement. I count myself fortunate to have the opportunity to serve as president of Maritime College. If you hare in the Bronx this summer, please stop by the campus.