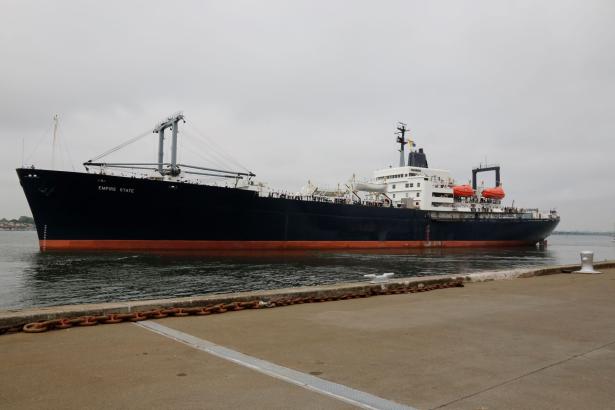 May 27 proved to be an exciting day at Maritime College as the Empire State VI departed Olivet Pier for its final summer at sea before it is retired in 2023.

On board for the 75-day sea term were 442 cadets and 81 faculty, staff and crew members. Bronx elected officials Councilwoman Marjorie Velázquez (13th District) and Assembly member Jaime Williams (59th District) joined the hundreds of families, friends and visitors who gathered to send cadets and crew off to sea. The Empire State VI will stop at the ports of Philadelphia; PA, Porto, Portugal; and Belfast, Ireland during the summer term.

This summer’s cruise incorporates the transition from two 50-day cruises to one 75-day cruise, which has been planned for the past several years. The new model allows for more flexibility among cadets, faculty and staff in terms of preparing for the fall semester and is the most cost-effective model.

In addition to the cadets, faculty, staff and crew sailing this summer, a chaplain from the Seaman’s Church Institute will accompany the group throughout the summer term to provide mental health and counseling services to all on board. Chaplain services were offered during last year’s Sea Term for the first time and due to its overall success, this highly beneficial and essential service will once again be made available to all on board.

The first port visit for the Empire State VI is Philadelphia, PA where the new training ship, Empire State VII is currently undergoing construction. Both ships will simultaneously share the same pier at the same time. At this port, Cadets will be allowed to tour Philly Shipyard and view the new ship in its construction phase. The ship will then depart to Europe for the international portion of the cruise.

Upon completion of its final voyage, the Empire State VI will be retired after 60 years of service. Throughout its years at Maritime College (since 1990), the TSESVI has been utilized to train and prepare thousands of cadets for careers within the global maritime industry. It will always be known to many as the vessel that effectively served its purpose by providing generations of mariners with the hands-on training and experience that is at the core of the Maritime College mission.