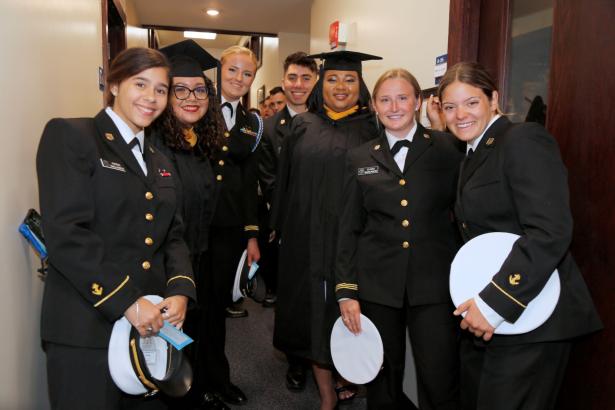 A flurry of Commencement activities and celebrations began on the morning of May 5,

The NROTC Commissioning Ceremony was the first event in which eleven ensigns took their oaths to be commissioned as officers in the U.S. Navy or Navy Reserve. During the ceremony, Ensign Meghan Eagleton was awarded the Sword of Leadership by the New York Council Navy League. In the evening, graduating seniors were invited to the Admiral’s Quarters for a champagne toast followed by the Senior Awards Dinner.

On May 6, despite the cloudy skies, the Veteran’s Military Recognition was held in the damp St. Marys Pentagon. Two Commencement Ceremonies followed: one for the School of Business, Science and Humanities, the second for the School of Engineering and the School of Maritime Education and Training. Between both ceremonies, over 200 graduates were awarded their diplomas.

Cadets Meghan Eagleton and Christopher Myers received the SUNY Chancellor’s Award for Student Excellence. The award acknowledges students for outstanding achievements that have demonstrated the integration of SUNY excellence within many aspects of their lives such as academics, leadership, campus involvement, community service, or the arts. It is the highest honor bestowed upon a student by SUNY.

In a virtual greeting, Acting U.S. Department of Transportation Maritime Administrator (MARAD), Lucinda Lessley, congratulated all of the graduates. Captain Thomas Morkan attended the event on behalf of MARAD and offered congratulatory remarks.

The 2022 Commencement Ceremonies featured two Honorary Doctorate Degree recipients, both of whom are Maritime College alumni. Donald P. Brennan ’61 was awarded an Honorary Doctor of Humane Letters during the ceremony for the School of Business, Science and Humanities. “This degree is a license to learn as you transition from education to experience,” said Dr. Brennan to the graduates. “The authority of knowledge is the gateway to success, and the one thing all great leaders have in common is knowledge.”

Richard A. Angerame ’73 received an Honorary Doctor of Science during the ceremony for the School of Engineering and the School of Maritime Education and Training. “It’s up to you to make your mark on the world,” Dr. Angerame said to the graduates. “You can influence change and make the world a much better place to live in by bringing your knowledge, experience and passion with you wherever you go next.”

Congratulations and much success to the Class of 2022!

Photo albums for each 2022 Commencement event is available on Maritime College Flicker.