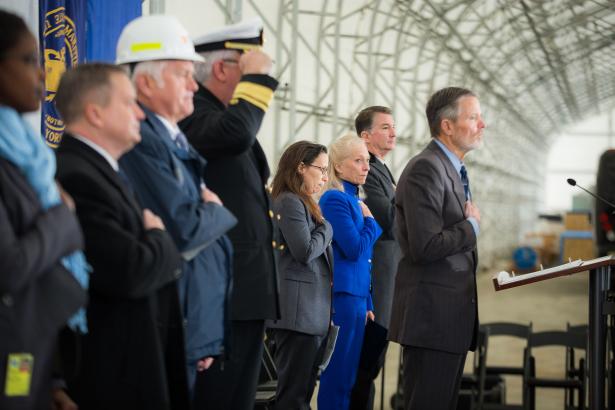 In an event that brought together maritime industry officials from the U.S. Department of Transportation Maritime Administration (MARAD), Philly Shipyard Inc., TOTE Services, Inc., government officials from Philadelphia, and higher education leaders from several State Maritime Academies, December 10 proved to be a historic and memorable day for the U.S. maritime industry and for Maritime College. The milestone event was covered by numerous maritime trade publications and outlets including, The Maritime Executive, Hellenic Shipping News Worldwide, Work Boat, Marine Log and Trade Winds, to name a few.

“That we would all be gathered here on this particular day to celebrate this event is somewhat serendipitous,” stated RADM Michael Alfultis. “December 10 holds a historic and significant meaning for two reasons. First, it was on this day in 1874 that the St. Marys arrived in New York harbor to serve as the first training ship for the College, then known as the New York Nautical School. Second, today we celebrate for the first time in U.S. history, the design and construction of a U.S. Government-owned class of multi-purpose ships for training U.S. mariners and supporting national security missions.”

“Today’s first NSMV keel laying is a critical milestone in an innovative effort that is producing state-of-the-art vessels in an American shipyard that will both train the next generation of American mariners and provide a new disaster response capability for the Nation,” said Acting MARAD Administrator Lucinda Lessley.

The keel laying was a realization of a vision many years in the making involving conceptualization, discussion, collaboration, letter writing campaigns, meetings, visits to Washington, D.C., and testifying before Congress. It was also made possible by the efforts and support of partnerships between the State Maritime Academy Presidents, Maritime Administration, and members of Congress. Construction of the first state-of-the art world class training platform that will be utilized by cadets is expected to be completed on schedule and Maritime College is poised to receive the vessel in 2023. When it arrives to the College, the NSMV 1 will replace the aging Empire State VI.

Prior to the NSMV 1 keel laying, Philly Shipyard President and CEO Steinar Nerbovik explained the traditional aspect of a keel laying ceremony in the shipbuilding industry. “As part of the shipbuilding tradition, the keel laying ceremony invites good luck in the construction and life of a ship as the first prefabricated block is lowered into the building dock,” he stated. After descending to the building dock, coins were placed on the blocks directly below where the keel would be laid. The keel, hanging over blocks suspended by a crane, was then lowered onto the blocks, finalizing the keel laying ceremony and solidifying the birth of the first world-class training ship that will improve the experiential learning and training of U.S. mariners for generations to come.

View the Keel Laying Ceremony in its entirety here.