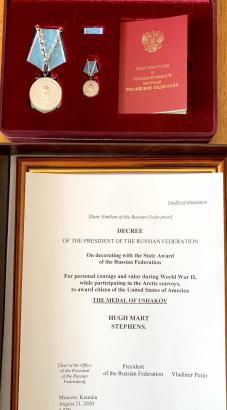 Captain Hugh M. Stephens, Professor of Marine Transportation, was awarded the Medal of Ushakov on November 6, by decree of the President of the Russian Federation, Vladimir Putin. The honor was bestowed upon Stephens for his “personal courage and valor during World War II while participating in the Arctic convoys.”

In a letter written to Stephens by Russian Ambassador to the United States, Anatoly Antonov, he notes, “In Russia, we pay special attention and respect to all those who contributed to the fight against Nazism. Your heroic feat is an inspiring convincing example for the next generation and should never be forgotten.”

During World War II, merchant mariners carried essential supplies over every ocean. None was more dangerous than the Arctic convoys to Murmansk, a port city in Russia. The convoys demonstrated an allied response and commitment to helping the Soviet Union after Germany’s invasion in 1941. Many of the convoys were attacked by German submarines, aircraft and war ships.

Stephens entered the maritime industry in 1943 as a 19-year-old seaman on board Liberty Ships, including the S/S John Brown during World War II. By the war’s end, Stephens had earned his third mate’s license, sailing as third mate aboard an army transport hospital ship. A beloved professor in the Marine Transportation department, Stephens holds a USCG Unlimited Tonnage Ocean Master’s License with many endorsements including Ordinary Seaman, Able Bodied Seaman, and First Class Pilot, Any Tonnage, for the Upper Bay of N.Y. Harbor, 16 issues, now in Continuity.