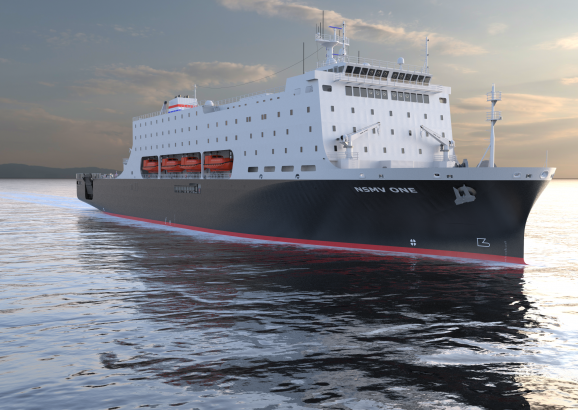 A New Training Ship and Historic Moment for Maritime College

December 15, 2020 marked a historic day for Maritime College and the State Maritime Academies (SMAs) – the cutting of steel ceremony that marks the commencement of fabrication for the first National Security Multi-mission Vessel (NSMV).

This is the first time in history SMAs will have a class of purpose-built training ships that are also designed to respond to national emergencies.

An important milestone for Maritime College, the steel cutting of the first NSMV is yet another step towards making the vision a reality. The College looks forward to the laying of the ship’s keel in approximately one year. Delivery of the state-of-art ship will take place in early 2023. replacing the College's Training Ship Empire State VI.

Why a New Training Ship is Needed

Maritime's current training ship, Empire State VI, was built in 1962. It has been used to educate and train Maritime students since 1989.

Of the six training ships in America, Empire State is the oldest and has been in service the longest. It has served us well, and continues to ply the oceans and seas, steered and powered by Maritime students.

But it is time to replace Empire State VI. The ship's technology is aging and stringent environmental regulations are coming that will limit the ship's voyage plans.

Climb Aboard the Empire State VII

The National Security Multi-Mission Vessel - an entirely new design and class of vessel - is optimized to be a training platform and to respond to national disasters. In the past, Empire State VI and the other state maritime academy training ships assisted with relief efforts for hurricanes Katrina, Sandy, Harvey, Irma and Maria. As such, these ships will be equipped with:

Where the Ship will Come From

Each of the six state maritime academies has its own ship, and all of them are reaching the end of their service lives. The time is coming, especially for the Empire State VI and Massachusetts Maritime Academy's Kennedy, to replace them.

For several years, the leaders of the state maritime academies, elected officials and other advocates have worked together as a coalition to build awareness of and support for this new class of vessel. Thousands of others have joined us in letter-writing campaigns, in outreach to media, and in a variety of other ways.

But our work is not done.

The Future of American Mariner Education and Training