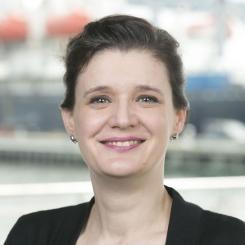 Dr. DeFalco teaches freshman English, world literature and culture, literature of the sea, science fiction and maritime piracy and predation. Her interest in maritime literature brought her to researching piracy and its depiction in literature. She has published several academic articles, including many about piracy. Her love of literature led her to pursue degrees at universities that house some of the world's greatest libraries and archives, reading the accounts of everyday people who sought independence at sea. Now, she enjoys sharing those stories with a modern generation of mariners in the unique environment of Maritime College. She is also a Liverpool football fan.