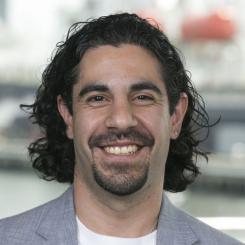 Born and raised in Texas—with a three-year stint in Kansas—Anthony DiPiazza expatriated to the Bronx, New York in the summer of 2008, where he adjuncted for several years at Hostos Community College, Marymount Manhattan, and Fordham University (Rose Hill Campus) in addition to SUNY Maritime before his promotion to full-time “visiting lecturer” in 2013 and then to “lecturer” in 2017.

At Maritime, Mr. DiPiazza develops and teaches ENGL 103: Freshman English II for Engineers, a course in technical writing in the sciences; he is the only professor who has taught this course every semester since its approval into the college curriculum in 2010.  This course begins with a deconstruction of linguistic metaphors, derived from DiPiazza’s undergraduate research in music in literature and later his graduate and post-graduate scholarship in logic, rhetoric, linguistics, and semiotics.  The course then advocates for a language of discipline-specific metaphors.  As a former computer science major, DiPiazza also integrates his studies in integral calculus, differential equations, and physics, as well as his independent research in basic material science to inform his students’ writing.

In addition to his teaching, DiPiazza also serves on the college’s Faculty Assessment Committee (FAC), where he composes departmental learning objectives and compiles data for accreditation institutions, such as SUNY and Middle States.