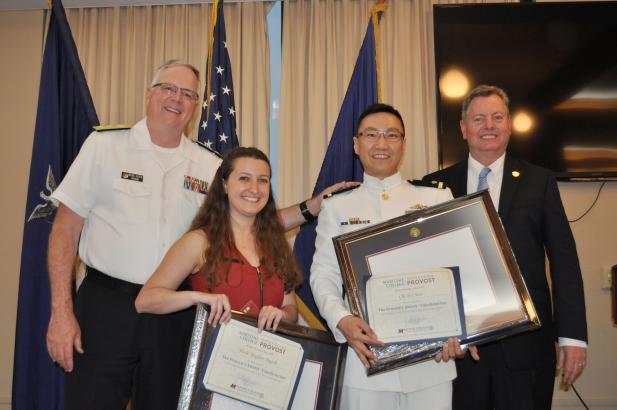 More than 60 SUNY Maritime College students were recognized in two ceremonies at the end of the academic semester.

The first ceremony, hosted by the Office of Student Affairs, honored approximately 20 students who were nominated by different departments and offices for their contributions to the college over the academic year.

The second, organized by the Office of the Provost, gave companies and individuals from the maritime industry a chance to recognize graduating seniors and applaud their accomplishments over the course of their Maritime careers.

“Our outstanding students make our co-curricular life at SUNY Maritime robust, exciting and fulfilling,” said Ariane Romeo, Assistant Dean of Students. “Their dedication in making our community one that is vibrant and diverse, is evident through their programs, ideas, volunteerism, and charities. Students who are involved outside of the classroom statistically stay in school, do better in school and graduate on time.”

To view photos of the Student Recognition Ceremony, click here.

The Senior Awards Ceremony, organized by the Office of the Provost, allowed the following donors to give gifts to some of the best graduating seniors:

To view photos of the Senior Awards Ceremony, click here.