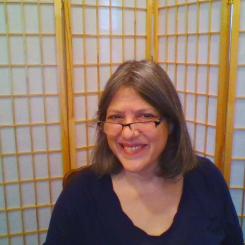 Elizabeth Hollander was reared and educated in New York City, graduating from Barnard College with a degree in philosophy. After working for nearly a decade in fine arts as a model and instructional assistant, she earned a Ph.D in English literature from CUNY Graduate Center as a Jacob Javits Fellow

Dr. Hollander has been teaching courses in visual culture, humanities, English and American literature, and advanced composition for over twenty years. In addition to Maritime, she has also taught at Lehman, Baruch and Hunter Colleges, at Stanford and Yeshiva Universities.

She has published a number of literary and scholarly essays on artists’ models, aestheticism, 19th century English and American literature, and narrative theory. Her ongoing projects include a collection of original essays on art, literature, gender, and film; and working as an independent writing consultant and book therapist. She lives in Queens with her daughter.